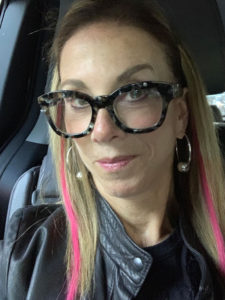 Born in New Jersey, Pamela Dove graduated with a BFA from Boston University. She began her career as a graphic designer. She then became an Art Director at several Boston advertising agencies, and ultimately a Creative Director.

With Pamela’s love of color and skill as a designer, she was hired away to become a Regional Merchandising Coordinator for a prestigious women’s clothing designer. From Back Bay, Boston she moved to Vail, Colorado where her primary focus became travel. Trips to South Africa, Morocco, Egypt, Cambodia, Thailand, Turkey, as well as London, Paris and Rome all served to further enrich her upcoming artistic pursuits. Pamela found her niche in printmaking at the National Academy Museum School in New York City. Her professional career focuses on Monotypes, a very painterly and unique form of printmaking.

Pamela’s version of printmaking enables the elements of texture, color and design that she is so inspired by to combine in a compelling manner that is both viscerally and intellectually stimulating.

Pamela lives in New York City and Southampton, where she is thrilled and thriving.

“My methods as a printmaker produce a more painterly quality in the finished piece than most would assume of prints.

The selected paper starts off in a water bath. The piece begins with my plate which is often acrylic, but occasionally I use other materials such as cardboard, paper, or metal as my base. I use oil-based printing inks on the plate that I apply with various implements, along with found objects and sometimes a French collaging technique known as Chine Collé. Often the plate will contain multiple layers and and multiple materials.

Once my piece is inked up and complete, I put it through a printing press. It will pass through the press many times, in order for the layers to print cleanly without smearing or becoming too thick and/or dense. The images must also not print too lightly, or the textures will be lost. The final result is a Monotype, or Monoprint.”

Each piece is one-of-a-kind. 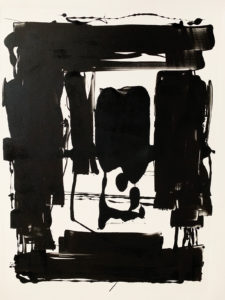